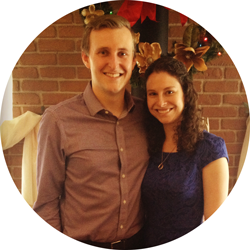 We are Michelle and Ian — come join us as we cook and share some of our favorite recipes. Let's eat!

This is the best Macaroni and Cheese! It has everything that makes macaroni and cheese so good – sharp cheddar, bacon, onions, and a crunchy topping. Start by cooking your pasta according to the package directions.  You want to follow the directions for al dente pasta, as we will be cooking it in the oven later. You don’t want it to end up mushy!

While the pasta is cooking, cut the bacon into small chunks and cook in a large pot over medium heat. You can also cook the slices whole and then crumble it, it just takes longer to cook it thoroughly and I usually don’t have that much patience.  Once the bacon is cooked, remove and set aside for later.  Do not discard the bacon fat – we will use that later. In the same pan (with all of the yummy bacon fat) add the onions and sauté until they are translucent.  Add the garlic and stir for a few minutes.

While the garlic is cooking with the onions, temper the milk by heating it in a sauce pan.  This helps to avoid curdling and keeps the milk from separating.

Next, make a roux to thicken the sauce.  To the onions and garlic, add the flour.  The bacon I use usually has enough fat that more is not needed, but if the bacon you use is leaner, you can always add a little bit of butter or olive oil, just remember that a roux should consist of half flour and half oil or fat. Add the warm milk and thyme to the onion mixture, whisking as you add it.  Let simmer for 5 minutes to thicken, then remove from heat.

Slowly add in the shredded cheddar cheese.  Once all cheese has melting, add the pasta and bacon.  Season with salt and pepper to taste and pour into a 13’’ by 9’’ baking dish. To make the topping, melt a tablespoon of butter and mix with panko bread crumbs and parmesan cheese. Sprinkle the topping over the pasta and bake at 375 for 20 minutes, or until the topping is slightly browned. 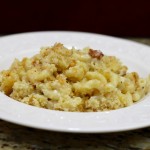 Macaroni and Cheese
This is the best Macaroni and Cheese! It has everything that makes macaroni and cheese so good – sharp cheddar, bacon, onions, and a crunchy topping.
Ingredients
Main Ingredients
Crunchy Panko Topping
Servings: servings
Instructions
Share this Recipe
Powered byWP Ultimate Recipe